Trauma leaves its impact in thoughts and feelings. When it goes untreated, these negative patterns become embedded in the cellular tissue of the body and may produce dysfunctional life patterns, emotional disturbances, and physical illness. Soul Detective goes into the matrix these negative patterns are imprinted upon to delete the negative patterns. Thought Field Therapy (TFT), developed by psychologist Dr. Roger Callahan, and other developments in the cutting edge field of Energy Psychology use simple, non-invasive techniques to bring the matrix of body-mind-spirit back into the balance needed for health.

Fear is at the root of most psychological disorders. Anxiety is its offspring, and trauma is its sequel. Healing from these disorders is often a long, painful journey. Everyone knows that fear locks up the stomach. Thought Field Therapy gives us the key to unlock the stomach by gently tapping a point on the stomach meridian located on the occipital bone right under the eye. TFT treats the same acupoints as acupuncture; however, rather than puncturing the point with a needle, TFT just taps gently on the meridian point associated with a negative emotion a few times. Incredible emotional relief can come from this simple treatment, which helps dissolve the imbalances in energy which created the disturbing emotions in the first place.

Two pre-requisites to successful emotional release with tapping are getting centered and clearing limiting beliefs around an issue.  Then a person taps on his or her own face, torso, and hands on a series of points designed to release blockages in meridians.  A process called Emotional Freedom Techniques (EFT) taps all of the energy points moving straight down the body to release energy blockages.  Because the process is so simple to learn, the EFT website offers a free newsletter and download of a self-help mini-manual explaining the process.  EFT is a simplified version of Thought Field Therapy (TFT), which taps a different sequence for each specific emotion.  For example, the TFT series of points used to release trauma is the beginning of the eyebrows, under the eyes, under the arms, and then under the collarbone. 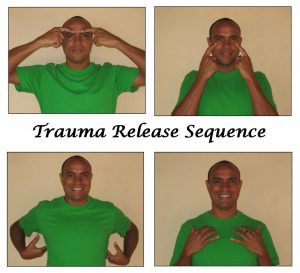 back to Topics page