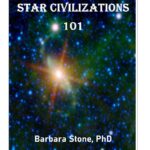 The US Government has known about the existence of ET races on the planet since the 1940’s. Why did they work so hard to keep this information secret from the American public? At last, they government is starting to release what they know, including the story of a live ET who survived the Roswell crash, the Serpo project ambassadorial exchange with a planet in the Zeta Reticuli star system, and the CIA spearheading the assassination of JFK because, among other reforms, Kennedy wanted the public to know the truth about Star Civilizations. For those who have the courage to look at the evidence, this book introduces the reader to two dozen different Star Civilizations, with very different agendas for their interaction with our species.

The troublemakers, mostly Reptilians and Greys, have been trying to keep our vibration low so they can enslave us. The Nordics, tall, beautiful, Scandinavian-looking people, have been at war with the Reptilians for thousands of years and are helping free us from Reptilian domination. The Arcturians, Sirians, Venusians, Pleiadians, and Andromedans in higher dimensions are helping raise our vibration so our planet can ascend to the 5th dimension, a place of love, light, and unity consciousness. If you sense you are a Starseed, that you came from a higher dimension to help Earth with her ascension, you may identify with one of these helpful Star Civilizations.

Amazon eBook:
$9.99
Pick up your ebook copy today on Amazon!

This Disclaimer contains important information Dr. Stone needs to share with you and for you to understand. Please be advised of the following: The information contained on this website and accompanying blog (collectively “website”), including ideas, suggestions, techniques, and other materials, is educational in nature and is provided only as general information.